Why Governments Do Almost Nothing

Why Governments Do Almost Nothing

I initially thought that the powers that be, the blokes with budgets and degrees as long as your arm, must have some sort of emergency system in place. That some sort of real life Bruce Willis with an array of scientific wizardry would kick into gear and do stuff. The reality is that asteroid hunters don’t have the funds to hold a firework display, never mind to launch something orbital.

Why? Because governments cannot justify spending taxpayer cash on long-odds threats from space because they know what public reaction would be if they did. “What about hospitals, education, pensions?” The vote-wielding majority would have valid argument.

The electorate would rather their government spent funds on more immediate humanitarian-oriented projects, hungry children, perishing rain forests, AIDS … and rightly so.

But perhaps we shouldn’t equate asteroid research with other environmental issues. After all, it does not “compete” in the same arena as other urgent earthly concerns. Maybe we should approach the funding of this science from a “defence” point of view. Pragmatically, we are talking about incoming missiles here … and our first line of defence has almost no lookouts. 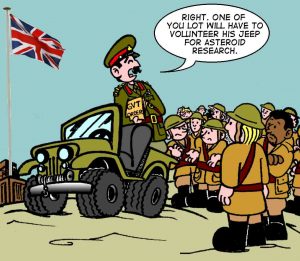 For example, it is an absolute truth that if the British government allocated to Spaceguard the cost of a tour of duty for one soldier and his jeep in Iraq, the astronomers would be over the moon. FAIR’s first donation of €409.72 was the single largest contribution this group of scientists had received in nearly seven years of existence.

Too often we assume the powers that be must know best. Well, just look at the tsunami. An early-warning system in the Indian Ocean was deemed not worthwhile by the authorities as a major undersea quake was thought to be decades away.

Fair to say, they regret that decision now. Thousands of lives would have been saved by a comparatively inexpensive detection system. We have ample evidence that the powers get it wrong. Another example would be the accuracy of the intelligence on Iraq’s weapons of mass destruction capability.

FAIR Society is not concerned with current geopolitical or religious matters; nor does it hold any moral or cultural stance on any matter, anywhere. These things have no bearing on a future large meteorite event.

This is purely about us … and a rock with our names on it.

These sentiments were confirmed by astronomer Jonathan Tate, director of Spaceguard, who wrote, “You have summarized the situation very well, and eloquently.” April 29, 2005. 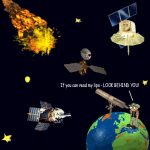 The Inevitable Can Be Avoided…Frontispace Articles 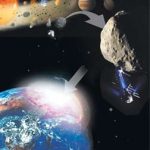 Asteroids Could Help Save the WorldFrontispace Articles