Compared to solving global warming, stopping an asteroid is a cinch providing we acknowledge the odds!

If you have ever placed a bet… then you must have also thought about winning!

Gambling takes precious time, filling out a betting form, standing in a queue, placing the wager, and then checking the results. Even logging into online betting is a procedure that requires specially allocated time. So, why do we do it when the chances of winning a national lottery are statistically slimmer than being mugged by a meteorite?

Realistically nobody “expects” to win the lotto, which indicates one participates purely for the ability to daydream about being an instant zillionaire and not because one thinks it’s a sound investment. Those who play will tell you they do so because if one doesn’t, then one stands absolutely zero chance of winning. Too true. They will also point out the simple fact that somebody somewhere is a winner and therefore it could be them next—logic based entirely on the probability of one’s number coming in.

Consider then that the odds of an asteroid impact are a lot lower than holding a winning lotto ticket. Yet, accepting the fact a smaller-odds lottery can work in the reverse, one where everyone holds the right ticket number and nobody wins, is most often immediately rejected as an improbable chance and not worth the bet or the time!

We have a technological ace up our sleeve but not the funds to play the hand!

The more asteroids found, the more proof there is of their abundance, thus increasing the odds

Sooner or later, one won’t miss unless we beat those odds.

Betting against an asteroid would be a wiser wager in the long run, a celestial lottery if you like, where statistically everyone benefits. There will be no single millionaire but rather millions potentially saved from losing everything. Imagine punters foregoing for once that one-in-a-million chance of instant wealth by passing the betting office and placing a single bet on our future instead. Chance would be a fine thing! If only life and logic worked that way.

If the scientists received just a fraction of the amount spent on longer-odds lottery tickets, they would have all the funding needed to make sure our future in space is secure by building the defence system to deal with threats … and most likely they could put a man on Mars.

Extraterrestrial missiles, supersonic space rocks that are hard to detect and difficult to track. Unlike other larger bodies in our solar system, rogue asteroids travel in irregular and random orbits, crossing the paths of planets. Impact craters on the Moon and Mars are testament to this phenomenon, though they are less obvious on Earth because of erosion, oceans, forests, ice, and the like.

We are still oblivious of most asteroids that could threaten us? Why? The usual stumbling block: NO MONEY, combined with a universal ostrich approach to a subject that even those scientists trying to find the more threatening rocks describe as the “giggle factor.” The idea that part of our planet will be obliterated by a rock from outer space is one that most people prefer not to contemplate. There’s also the “accidents happen to other people” attitude to contend with.

Governments, authorities and powers that be have to invest taxpayer funds on more immediate home-grown issues and have difficulty in justifying expenditure on future “long-odds” threats (meteorites, comets, and asteroids) from space. This means that asteroid-seeking projects come well below other current concerns. The problem is that there is always some more apparent and urgent crisis meriting assistance today … and so funding the hunt for NEOs remains permanently on less-urgent status, in tomorrow’s “to-do” pile, the “pending” basket. The private sector, however, doesn’t have to wait until tomorrow. Joining the FAIR Society today is your contribution to all our tomorrows.

Compared to global spending on research into other environmental phenomena, asteroid hunting comes a distant second!

Only a handful of dedicated and under equipped scientists are involved in the search—a far cry from the impression created by Hollywood movies.

The [NEAR Shoemaker Project] landed on Eros, one of the nearest asteroids that we’ve been able to track. The problem is that we only know about asteroid activity in a fraction of the space around us, particularly when it comes to objects smaller than 1 km wide.

Close up of Eros Asteroid taken by the NEAR Shoemaker Project  – fortunately we know this one isn’t a threat!

Don’t Be a Dinosaur

The massive asteroid impact in the late cretaceous period [K-T Impact] is reputed to have been the cause of the dinosaurs’ extinction. It is one of many impacts in our planet’s history. The indisputable fact is that asteroids do collide with Earth and have caused global devastation. All the combined nuclear arsenals of today couldn’t come close to the power of an impact the size of K-T.

Many of the Moon’s craters were made by asteroid impacts. 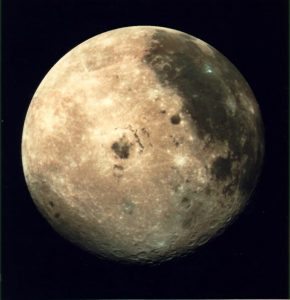 Now look at the known impact craters shown as dots on the image of our planet below (obviously only a fraction of the actual number of impacts is shown). 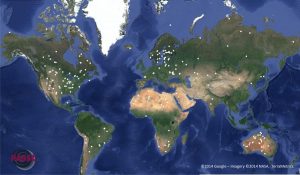 But those craters are ancient!

Some of them are so old that it’s difficult to imagine such events could be part of the “modern world”; they seem almost fictional.

However, within living memory, an asteroid caused devastation on the planet. There are people alive today who were around in 1908 when an asteroid exploded over Tunguska in Siberia.

The [Tunguska event] in 1908 flattened 800 square miles of Siberian forest, and the object didn’t even reach the ground. Imagine the effects of this event if it had happened over a densely populated area— the devastation would dwarf Hiroshima!

Flattened Siberian forest in the 1908 event

There is more than enough evidence to justify taking this matter seriously.

Most folk don’t like to think about celestial missiles any more than they like contemplating being zapped by lightening or worrying about their plane crashing. In the later cases, however, we take protective measures and support an insurance system. The odds of either happening to an individual are comparable to experiencing an asteroid collision in one’s lifetime, yet no “insurance fund” exists to support scientific research into NEOs.

Statistics and comparisons can be tweaked. Debate about how many “killer” asteroids have collided with our planet in the past do not detract from the simple fact that a collision can and will happen. Neither man nor computer can answer the fundamental question: When?

One of the biggest questions of all time remains unanswered only because of the lack of a comparatively small amount of money.

“Odds are you’ll die somehow. For U.S. residents, here are some ways, and some odds the experts have applied to them:

How FAIR Works
Search F.A.I.R. Society
Recent News
Frontispace Articles
Help the Cause
To learn about how to make a donation to SpaceGuard UK, please contact The Spaceguard Centre.
Copyright protected © 2002-2020 by the FAIR Society - All Rights Reserved Worldwide
Hosted and implemented by DIGIST and PC Green
Contact Us