Asteroids Could Help Save the World

Too often, the negative aspect of asteroids is highlighted on the big screen and in the media. Predictions of megacatastrophes associated with this phenomenon tend to focus on our fears rather than highlighting the fact that one day asteroids could save our planet. 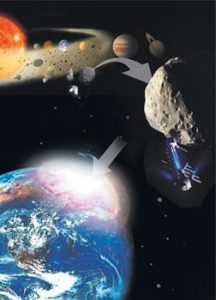 Perhaps a Hollywood script that ends with Bruce Willis a billionaire instead of vaporising him into molecules would help? Perhaps movie about some brave entrepreneur who not only saves the world by deflecting an incoming asteroid by placing a thruster on it (as opposed to blowing it up) but manages to bring safely into Earth’s orbit a giant meteorite rich in some high mineral commodity.

Such a film would be based on as much scientific forecasting as the scenarios in Deep Impact and Armageddon were (probably even more so as astronomers lean more toward using the deflect-by-thrust form of defence as opposed to nuking the object and potentially turning it into several incoming disasters).

Booster rockets could ‘steer’ asteroids…if we know where to find them. Image Courtesy NASA

The plot could go on to show that this was the first of many orbital mines, which ultimately helped save our planet from its dwindling supply of resources. As a sci-fi flick, it could include the scientific predictions that asteroids will become extraterrestrial habitable “islands” (thus eliminating the extravagant cost of building man-made stations).

Instead of the projected stigma of being wackos who “search for doomsday rocks,” astronomers may well become thought of as celestial treasure hunters in a world that could do with a little more hope and a little less fear … a positive script for a change!

It may be that space rocks are not our future nemesis but will become our stepping-stones into the solar system and beyond … this century’s new “gold rush” paving the way. 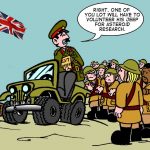 Why Governments Do Almost NothingFrontispace Articles

Giant Meteorites Not on Your List of Concerns?Frontispace Articles