The next giant leap for mankind may not be in the form of a footprint on Mars but a technological baby step here on Earth.

A comparatively small, innocuous machine has already begun creeping into our lives, and it is rapidly developing capabilities that could well have the most profound influence on human society since the advent of fire.

Whilst the science is not yet refined enough to be admissible in court, prototypes incorporating this technology are already being employed against such things as insurance fraud, and full legal sanction is said not to be too far behind.

The future introduction of a portable “Truthsayer,” for want of a way of describing it, may change our lives beyond anything to date. This machine, a sort of superpolygraph, could mean we will live in a society where it is impossible to lie. The social implications of the Truthsayer are boundless.

“Mister Jones, did you have your hand in the till or cheat on your wife? Answer yes or no on both counts please.” The gent in the dock would have no need of an expensive suit to lie on his behalf; nor would the hiring of private investigators have been part of the equation.

Perhaps even within a generation, say scientists, the nature of courtrooms and detective work will have altered so radically as to make our current system look antiquated. The positive possibilities are endless: nobody could be held overnight on suspicion after requesting a Truthsayer test to prove his or her innocence, for instance. Bank managers could reserve the right to ask mortgage and loan applicants to have a minute with the Truthsayer, so fewer suspect deals would occur.

If this technology were readily available and unobtrusive, wouldn’t voters like to see their candidates monitored by a Truthsayer in a live debate? Chances are in favour, which would mean, in future, we could even have honest politicians.

Imagine the speed of court cases and the investigation and detective work that could be saved. We will be society where the truth will out simply because it will be impossible to lie.

Scientists also tell us that in the near future, it will be possible to detect whether a person is lying just by monitoring the tone of the caller’s voice. This could force us to be so honest that it’s almost scary. Infidelity will surely drop, as will the number of corrupt business deals. Some have speculated that this technology smacks of Big Brother and an invasion of privacy, but if nobody has anything to hide, because they can’t anymore, doesn’t that put us all on equal footing? We would have a world where no amount of bribery or clout could influence policies or alibis.

So, we could soon be a society forced into telling the truth.

If it is the truth that sets us free, then perhaps it will be a man-made invention, an unemotional, unspectacular object, and not a space ship, that will ultimately liberate us and change the way we exist forever. 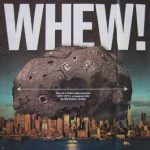