From a purely defensive point of view, one could be forgiven for being under the impression that we have nearly licked this asteroid hazard thing after NASA’s phenomenal success with operation Deep Impact on July 4, 2005.

The tricky bit was being able to whack a comet bang on the nose 83 million miles from Earth with a projectile traveling at 23,000 mph. As scientist Don Yeomans said, “it was like trying to hit a bullet with another bullet, while filming it from a third.”

One of the favoured blueprints for asteroid defence is more than halfway there, it would seem. It doesn’t take a wild imagination to foresee that it would merely be a matter of exchanging the payload of the impact probe to convert it into a defensive nuclear missile instead.

Similarly another popular theory for deflecting an incoming asteroid is to attach a booster rocket to a near-Earth object, and in the vacuum of space, its thrust could push the threat off its trajectory. In February 2001, scientists showed they could land a probe on an asteroid, and one assumes current technology must be within grasp of being able to land an engine on one. This all sounds like reassuring stuff, considering that we are talking about protecting our planet from an asteroid when it comes.

But there is one huge flaw in this progress: rocket scientists can only take action if they have a target, and right now the vast majority of our celestial horizons remains unchecked. (Note too, that Deep Impact took seven months to reach its target.)

It’s a bit like a modern warship, where the blokes on the bridge have the weaponry to hit a distant target, providing they have a blip on the screen. But if the chaps down in the radar department only have partial sight, then all their technology is for naught. 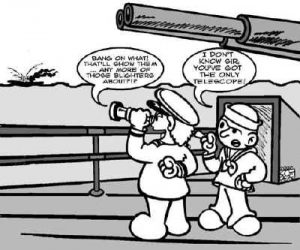 Also, both these missions occurred on known bodies: Eros, one of the largest asteroids ever discovered and Tempel 1, like all comets, one of the brightest features in the night sky. However, the real threat still exists in the unknown, the unscanned pitch black of space we haven’t surveyed yet, where smaller, darker, asteroids lurk.

Another misleading aspect about these missions is the cost factor. The $330 million mentioned for sending a high-tech “washing machine” on a celestial suicide mission gives the impression that this science cannot be short a bob or two. Granted, Deep Impact’s mission was focused on investigating matter from the birth of our solar system, and the knowledge gleaned shouldn’t have a price tag, but the truth is that the guys in the radar room are shy on equipment and can only cover a slim proportion of the horizon … and then only for the largest vessels.

It is a common misperception that the science of near-Earth objects is one big body of highly sponsored boffins working jointly on expensive space technology, when in fact there are very distinctive areas to this science.

The truth is that the fellows in rocketry operate under different budgeting and departmental structures to the blokes in “radar,” who, even though they are still a long way from achieving 100 percent coverage of our skies, remain at the back of governmental pay lines.

A flawless defence plan is only as good as its early-warning system; blind spots and lack of intelligence can be the biggest killers. Ask any admiral.

This logic obviously also applies to any blueprint scientists come up with for preventing an asteroid impact as they all require interception coordinates: most recently, a “gravitational tractor.” In November 2005, astronauts Ed Lu and Stan Love of NASA proposed sending an unmanned spacecraft to tug the threatening asteroid off course… [more] 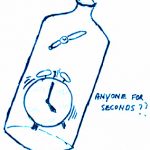 Time in a BottleFrontispace Articles 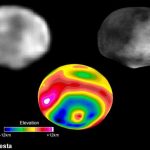 The Enduring Mysteries of AsteroidsFrontispace Articles