Late word out of the IAU’s Minor Planet Center: a small asteroid will pass close to Earth tomorrow (March 2nd) at 13:44 Universal Time. How close? The MPC’s Timothy Spahr calculates that it’ll be 0.00047 astronomical unit from Earth’s center. That’s only about 40,000 miles (63,500 km) up — well inside the Moon’s orbit and roughly twice the altitude of most communications satellites!

This little cosmic surprise, designated 2009 DD45, turned up two days ago as a 19th-magnitude blip in images taken by Rob McNaught at Siding Spring Observatory in Australia. It was already within 1½ million miles of Earth and closing fast. 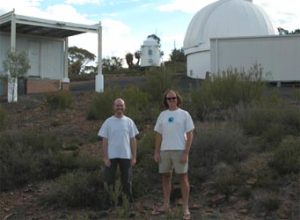 Thankfully, the news media have become less sensationalistic when it comes to these asteroidal close calls — especially since one actually struck our planet last October 7th, at night, and the impact went virtually unnoticed.

So why post this? Well, we figured someone might want to watch it zip by at up to a half degree per minute! Even though it’s small, likely no more than 100 feet (30 meters) across, it’ll brighten to magnitude 10½ at its closest — easily within reach of an 8-inch backyard telescope. That’s the good news.

The bad news is that the point of closest approach occurs over the Pacific somewhere west of Tahiti, so the most likely viewers are in Australia, Japan, and maybe Hawaii. Sure, you could look before or afterward, but it’ll be brighter than 13th magnitude only for a few hours.

If you want to give it a try anyway, you’ll need to generate an ephemeris of positions for your specific location, due to the wide parallax of an object so close to Earth. And if you manage to spot it, be sure to add a comment below to let us know.

Another Warning Out of the Blue—and Black

A small asteroid, big enough to wipe out greater London, was discovered only a couple of days before it was due give us a celestial bullet burn on March the 2nd 2009. While 64 000 km may sound like a sizeable distance here on Earth, an object travelling in excess of 12 km per second, could cover that gap in about an hour and a half.

The space rock, innocuously dubbed the 2009 DD45, with a diameter of about 115 feet (30meters) was roughly the same size as the Tunguska event of 1908 which hit with the force equivalent of 1000 Hiroshima bombs. This new observation was the latest in series of incidents involving meteors. On February 15 in broad blue daylight, a streaking fireball was caught on camera over Texas, creating a sonic boom, and that was thought to be only a meter wide.

In Canada on the 21st of November 2008 another pyrotechnic display was captured on video scaring the Dickens out of witnesses; and last October 7th a meteorite was tracked and exploded in the atmosphere with the force of a nuclear device over the Sudan. So how many warnings do we need before this threat is taken seriously enough to be given a red flag priority as a clear and present danger?

Funding for asteroid research perpetually takes a back seat because of more obvious, and perpetual down to Earth crisis. Do we have to wait until disaster strikes, like we did with the 2004 Asian Tsunami, when for comparatively little cost in preventative measures we could have saved tens of thousands of lives?

Governments cannot justify precedence in searching for long-odds space boulders with tax payer money with so many home grown issues to deal with, and astronomers need help from the private sector if we are to find these meteors in time to do something about them.

Another factor which is misleading to the general public is that when these large ‘shooting stars’ occur, they are often reported as once-in-a-lifetime celestial fireworks. Eyewitnesses are deemed lucky to have seen the event and few appreciate that they were lucky the meteorite wasn’t just a few meters wider.

But forget the doom and gloom of this prediction for a minute because, unlike earthquakes, volcanoes and hurricanes, this in fact is the one and only natural phenomena we can actually prevent— providing we have the foresight and time to act. 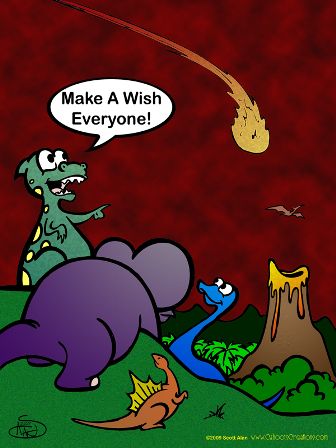 Kelly Beatty, Sky and Telescope
Recent Posts
Search F.A.I.R. Society
Recent News
Frontispace Articles
Help the Cause
To learn about how to make a donation to SpaceGuard UK, please contact The Spaceguard Centre.
Copyright protected © 2002-2020 by the FAIR Society - All Rights Reserved Worldwide
Hosted and implemented by DIGIST and PC Green
Contact Us 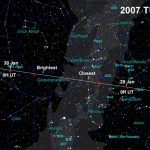 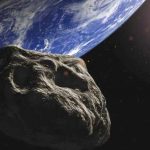